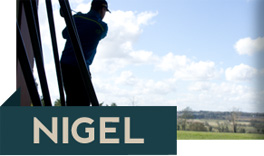 Nigel thought he was a standard 14 handicap golfer using standard off the rack clubs and then he saw the difference ForeGolf custom clubs could bring to his game.

If you’ve ever wanted to see a before and after story of how playing with ForeGolf custom built clubs can make an improvement over standard clubs, I’d like to share Nigel Doherty’s story.

The Result
In the first 10 rounds of golf, Nigel won

If you’d like to play with ForeGolf custom built clubs, book your custom fitting analysis

« Previous Post:  TaylorMade R1 Driver, how to avoid getting it wrong |     Next Post:  What would you pay to get clubs that made you a better golfer ? »